The average treatment time is 10 – 15 minutes. Many people get it on lunch break or even coffee break and are back to work. Mountain Radiance Medical Spa, conveniently located in Downtown Asheville provides the opportunity to stop by during the work day for treatment!

With over 4 million Botox treatments per year in the United States, Botox has an extremely low incidence of complications. While complications with Cosmetic Botox are possible they are extremely rare.

Botox gives reliable results that are significant, but subtle, when treatment is performed by an experienced injector. Our most common Botox review is that “it looks so natural!”

Use of Botox brand of botulism toxin (Bot. Tox. A) for cosmetic improvement is the most frequently performed medical procedure in the United States and likely the world. Over 4 million visits for Botox injection in the US occurred in 2014 and the number has been steadily rising since 1979 when this medication was introduced. 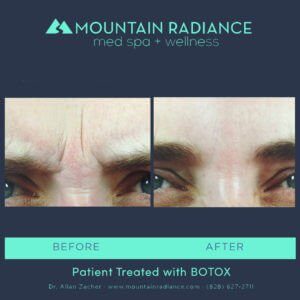 So, what is Botox? In lay terms it is the toxin – now used as a medication – produced by Clostridium botulinum. “Botox” is the original brand and is composed of the active ingredient: botulinum toxin A. There are 3 versions of Botox A, two other brands include Dysport and Xeomin.

Why do we use Botox at Mountain Radiance instead of the other brands (Dysport and Xeomin)? Because like Coke, I feel “Botox is the real thing”. It has been used for cosmetic purposes since 1979. The other two are arrivals within the past couple of years. So, first, Botox has been used longer than any other version for so much longer with so much clinical history, it would seem to be the safest one! Certainly Botox in Asheville has been the most commonly used “wrinkle relaxer” even though Dysport and Xeomin have been recently introduced.

A research study published in Biologics in 2014 and available online shows that the 3 brands which are slightly different versions of Bot. Tox A are not interchangeable. This paper demonstrates that the different brands have different strength per unit and different lengths of activity.

The bottom line is that Botox brand by Allergan has been around literally decades longer than the other two, they are not interchangeable, they have variable lengths of activity. If you want the best result you want to be treated by a doctor who has an extensive knowledge and experience with a specific version or brand of this medication (e.g. Botox brand) – because the results are variable when you switch from one product to another.

What are the benefits of Botox?

Botox, of course, is primarily used to relax the muscles that cause wrinkles on the face. This cosmetic effect is the most frequently targeted use, though it has been used medically to treat a wide variety of additional medical problems such as migraine headaches and muscle spasms, hands-down the most common use for Botox is cosmetic.

At Mountain Radiance Medical Spa we have been using Botox to treat cosmetic concerns of wrinkles since 2008 and have treated many hundreds of satisfied clients. Areas we have treated successfully include the forehead (frontalis muscle), between the eyebrows (glabellar area, or glabella), the wrinkles around the corners of the eyes (“crows feet” or periorbital rhytids) and occasionally “orange skin” appearance on the chin and the vertical lines (“kissing lines” or sometimes, “cigarette lines”) above the upper lip (though treating this area may require filler such as Volbella, as well).

We have also been one of the only places in Asheville to use Botox to treat hyperactive sweating under the arms (hyperhidrosis) and in the hands and feet. This is an extraordinarily effective treatment.

How Does Botox Work?

What causes wrinkles? How does Botox make wrinkles go away? First lets deal with a misconception, Botox does not “tighten” skin. In the contrary, it RELAXES muscles. Muscles that cause wrinkles are in the forehead, between the eyebrows, by the eyes (“crows feet”). When these muscles contract they cause the wrinkles. 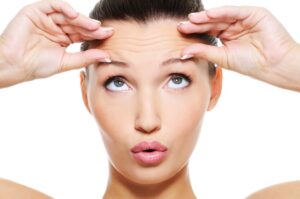 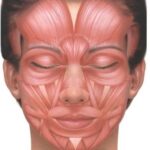 Botox is a neuromuscular blocking agent. It works at the level of the junction of nerve and muscle.

Sometimes people ask me if estheticians can inject botox. Not in North Carolina! The competent injector needs to understand the facial muscles, which muscles cause wrinkles and how those muscles interact and relate. This will help avoid having problems such as “droopy eyes” (see my blog, Botched Botox).

The competent injector should also understand how botox works. Some may take issue with this statement, but Botox is a medication derived from one of the worlds most potent neurotoxins, so I think it really is a good idea that the doctor (or nurse) does understand how it works. It actually works in a way very similar to the way that some drugs given during surgical anesthesia work (during surgery, sometimes muscles need to be very relaxed – but temporarily!) Here’s a diagram at the level of the neuromuscular junction demonstrating how Botox blocks release of a neurotransmitter (acetylcholine) which would trigger the muscles to contract: 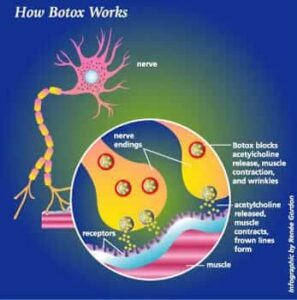 Sweating is normal for people! Everyone sweats underarms and all over the body, this is natural and without this normal function humans would have trouble with temperature control. Some people have abnormal sweating where the sweat from the underarm area, sometimes hands and feet is excessive.

Highly abnormal sweating is called hyperhidrosis. We have seen (and treated) this; it’s much much different from “normal” sweaty hands or normal underarm sweating that can leave a mark on the clothing. Hyperhidrosis of the underarms will cause so much sweat that water literally drips off the hands in a room with normal temperature. True hyperhidrosis is rare.

Fortunately, Botox at Mountain Radiance Medical Spa in Asheville can treat this! Treating underarm hyperhidrosis is relatively easy, it takes 25 units of botox under each arm. At the time of this writing Mountain Radiance Medical Spa charges $500 for this treatment, and unlike facial cosmetic treatment, this lasts about 6 months most commonly (length of response can vary, and we reserve the right to change the price).

Treating hyperhidrosis in the hands or feet with Botox is a bit more complicated because these areas are very sensitive and need to be numbed significantly prior to treatment. As an anesthesiologist, once again, we are a superlative choice for managing this.

Botox Before and After

These are examples of the effects of Botox. Note that it takes three full weeks for the benefits to be complete.

How Much Does Botox Cost Per Unit?

This varies tremendously by patient. We offer complimentary consultation so you should make an appointment after you read this.

One answer is that for most people regular treatment with Botox does not cost more than getting hair and nails done on a regular basis per year.

Factors that go into the cost of Botox include: age, strength of the muscles, degree of sun damage, and other factors. Treatment of just the forehead can start as low as $100 (at the time of this writing, subject to change). The average price for forehead and glabellar complex (angry lines between the eyebrows) runs about $375 per treatment but again this can vary. Some people need as much as 70 units, costing over $700 but this is rare.

While some practices charge “by the area” we think it is much better to charge for the exact amount of Botox a client needs to achieve their goals. We (at the time of this writing, subject to change) charge $10 per unit for new clients and $12 per unit for existing clients.

One thing a client can do to reduce the cost is to sign up with Brilliant Distinctions Program prior to your first visit, or if you have an account, make sure you have the login credentials so you can take advantage of the loyalty points (worth at least $20 for each Botox treatment and much more for the fillers like Juvederm)

Botox for an eyebrow lift: 2-5 Units

We treat other areas besides the ones listed. For an accurate quote, be sure to schedule a free consultation with Dr. Zacher.

How Long Does Botox Take to Work?

While some improvement in wrinkles can be seen as early as 4 – 5 days it takes 2 – 3 weeks for it to have it’s full effect. We compare treating a patient with Botox like using invisible finger paint to make a picture that you can’t see for 2 – 3 weeks!

We like to say that in 2 weeks the Botox is about 85% effective and by the end of 3 weeks it’s had its full effect.

How Long Does Botox Last?

While the effects of Botox can last 6 months or longer, it’s important to have it repeated approximately every 3 months to keep the wrinkles at bay. After someone has been getting Botox on a regular basis for 2 to 3 years frequently we can stretch out the visits and cut the dose because with regular maintenance the muscles become progressively weaker – it takes longer to recover and less Botox to achieve the beneficial effects.

Difference Between Botox and Fillers?

The most important points to remember:

Some of our clients who get Botox for cosmetic purposes do enjoy reduction or rarely elimination of headaches of various sorts. However, our expert injectors have been trained to practice cosmetic treatment with Botox, and have not been trained to use Botox to treat headaches, and therefore do not propose to use Botox for any medical concern other than cosmetic uses.

Should someone want treatments for headache which would be billed to insurance, we recommend Asheville Neurology Specialists as the doctors who specialize in headaches and other neurologic conditions.

Can You Workout After Botox?

The Brilliant Distinctions rewards program – now called Alle – is a free membership where you can earn points to save money on various Allergan brand products. Some Allergan products are Botox, Latisse, Juvederm and Natrelle. Members also receive notifications for special offers or events related to their selected interests.

Yes, You Should Still Get The COVID-19 Vaccine Even If You Use Cosmetic Fillers

Hyaluron Pen is DANGEROUS – Don’t Use It!